My father has rarely cooked a meal during his 70-plus years. In that regard, he’s a pretty typical Indian male in his generation. It just wasn’t done in India, and by the time we migrated to America, he was in his 40s and well-indoctrinated into the “Real Men Don’t Cook” school of thought.

Thirty years later, he’s been treated to some spectacular meals by his son and son-in-laws. I mentioned before that we’re a cooking family, but it still wasn’t enough to get him into the kitchen.

Then one day, he and my mom went to dinner at the home of a couple they had newly befriended. They were eating an amazing meal of chicken and biryani when my father started complimenting the wife on the food. “Don’t tell me,” she said, “tell him.”

To my father’s (and my mother’s) amazement, she said her husband, who is my dad’s age, had made all of the food. And suddenly, as I like to imagine it, a light switched on in my dad’s head. The Light of the Enlightened Indian Man. Real men can cook, he realized, and really well!!

My dad and his friend spent the rest of the evening talking about cooking (!), and the secret to this man’s culinary success was revealed: a website that showcases simple Indian cooking videos. The key is that the chef in the videos is an Indian guy. (Clearly he brings out the “if he can do it, so can I” male competitive hormone.) So my dad went home, watched some of the videos, and started cooking. My mom, needless to say, is thrilled. 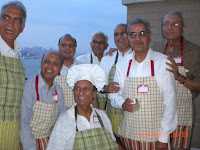 News of the website caught on among his friends, and before long they decided to have a dinner party in which -- and I love this part -- all the husbands cooked instead of the wives! The photo here is from their dinner night. Can you imagine how psyched their wives were?!

When I heard all of this, first of all, I brimmed over with pride for my dad. I can imagine it's not easy to develop a completely new hobby -- not to mention overturn a mindset -- at that point in life. Secondly, I figured if this website inspired my father to start cooking, it must be pretty good. So I went on and took a look myself, and seriously: I am willing to guarantee that, if you cook even just a little right now, this website will inspire you to try a dish you've never made before.

It’s called VahRehVah.com, and it features 5-to-10 minute videos of everything from chilli paneer to banana dosai (“your kids will go crazy about this item”). Some of it is way too complex for me – I don’t think I’m going to be making jalebi any time soon. But the vast majority of the recipes are easy. The most-viewed section includes butter chicken, egg biryani, and vegetable puffs (an easy appetizer for parties – buy frozen pastry sheets and fill them with any type of vegetable or meat filling, then bake). The recipes are in written and video form. I love the videos because they show details, like the exact size chopped potatoes should be, or what a “gravy” should actually look like.

The cook in the videos cracks me up as much as the name of the site. “Vah-Chef” Sanjay Thumma, who could easily be one of my cousins in India, has an infectious excitement about food. His down-home attitude about the whole thing is refreshing. He’s got a special kids’ corner, named after his daughter Shreya, featuring dishes that kids like. Best of all, the site is dedicated to his mom, “who inspired me and introduced me to this awesome world of cooking and culinary art. My house always smelled good. It wasn’t the smell of room fresheners or incense sticks. Rather, it was the smell of fresh baking and cooking.”

Check it out, and while you're at it, call your husband/fiance/boyfriend over. You never know when that male competitive hormone will kick in!
Posted by idli at 6:40 AM 1 comment:

Finding this Indian cooking website has changed my world. I can cook basic Indian food, thanks to my mum, but when it comes to anything a little complicated, I get a lazy -- especially because (from experience) -- after a hours of work, the end result has not been worth the effort. I would also blame the disaster dish on me living in Spain: "All the spices are not available and what are available just don't taste the same." It's all rubbish. What I needed was a good guide and I think this is it!

A bad translation of "vah reh vah" in English would be "that's just awesome", but it's enough to give you the gist. The website has recipes of over 230 Indian dishes, but the best part is that many of the Indian recipes have a video guide to go with them.

The "Vah chef" Sanjay Thumma is a great host. Very Indian. But great. His passion and talent for cooking is evident in the videos. For example, in his video that teaches you how to prepare Hydrabadi Biryani (one my favorite Indian dishes), he gets a little emotional in the end; when he tastes what he made, I'm pretty sure that his eyes welled-up with joy!


Another element key in making this website a super hit: Since it is targeted towards non-resident Indians, he often mentions in his recipes ingredient replacements should you not be able to find something specific in your country. You can also help yourself on this front by checking out the site's Cook's Thesaurus.

You can also access Sanjay Thumma's video channel on YouTube. He is quite a personality, you will enjoy watching him. He has won a gold medal for his recipes in the All-India Chefs competition for culinary arts, and all the video work is his own production done in his digital studio, that by the way, has just gone HD!

Other than Indian food, there are recipes for other cuisines; however they don't have video content. A must visit if you want to cook some good Indian food.

I do a lot of Indian cooking at home. For me it's an area of constant exploration and discovery that is further rewarded with great food that I prepare in my own kitchen. I started my education of Indian food with several good books. I will certainly review them here in future posts.

Cookbooks are of course indispensible when learning to prepare new foods. A great cookbook will not only teach you how to prepare certain dishes, but will offer photos and even a history of the food and processes involved. Some will even give you a philosophy lesson. Books are not the only route in the age of the internet though and sometimes you can find a great source for recipes, tricks, secrets, alternatives and details there.

I stumbled upon Chef Sanjay Thumma while looking on YouTube for a good way to prepare naan in a conventional oven. Sure enough he had a couple of alternatives for preparing it and they worked out really well. What I like about Chef Thumma is that he presents his video recipes in a friendly, dynamic and easy-to-follow format. His enthusiasm is engaging and his knowledge is extremely helpful.

I had mentioned in an earlier post how I had been chasing and tinkering with a chicken makhani recipe for a long time and that I had finally gotten it to where I liked it. Well, in Chef Thumma's video on chicken makhani he mentioned that Indian restaurants around the world add a little ketchup to their recipes. Sure enough, it was a very important addition to my recipe for chicken makhani and was the missing element I had been searching for! Our recipes for this dish do differ, but I wouldn't love mine if it wasn't for this little gem of knowledge I got from Vah Chef.

His videos are full of similar tidbits and he's very entertaining to watch and listen to. If you're into cooking Indian and you want to augment and polish your skills, I highly recommend Chef Sanjay Thummas website and blog. It is definitely a website I love!

Visit vahrehvah.com to see Chef Sanjay Thumma's instructional videos and recipes!
Posted by idli at 6:01 AM No comments: